Fantasy Feedback: You Tell Me

In the wake of Turkey Day I have a whole day to myself to write. Since I'm 3K behind on my Nanowrimo count my butt will be in the chair most of today.

This is my first foray into the Urban Fantasy genre. I've taken the magical race of people in my fantasy novel and propelled a remnant forward in time, where they struggle to survive in the modern world. One poor human female gets mixed up in their internal affairs and finds herself stuck with magic, unable to go home but an outcast in Hanorjan society.

However, I'm so accustomed to writing epic fantasy that I'm wondering how much these two genres are allowed to cross. I can't help writing magical elements in my stories. They just creep out of my fingertips onto the keyboard. My heroine is resistant to believing the things that are happening to her but gradually has to admit they are real, though she still creates elaborate rational explanations. 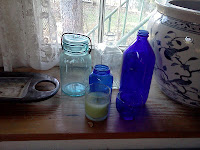 So what is your opinion on this, if you read fantasy or urban fantasy? How much are you willing to suspend belief in a modern setting? Would you read something with a strong fantasy element set in the "real" world?

If you don't read fantasy or or don't have an opinion, tell me what you like to see in a good story. What pulls you in most? Characters, setting, exciting action, beautiful writing?

They're All a Little Piece of Us

I've been taking my own advice at last and writing first, blogging later. Nanowrimo has given me an excuse to put my writing at the forefront for a month, which is bliss! I mean, the day job, the family, basic chores and errands are still all there. I still attend every soccer game and make dinner and wash clothes and all that.

But as soon as I'm done... out comes the laptop.

The words are pouring out like espresso drinks at Starbucks. Sometimes dark and intense, sometimes frothy and sweet. It has been years since writing felt this way.

But... it's got me thinking. The crux of all good writing for me is the characters that live and breathe and emote through my fingers onto the page. I used to think that they just sprang from my subconcious fully formed, but as I write more I realize that they are all, in some way, a little piece of me. My fantasy herione is the dutiful, insecure young woman I was when I first left home. Her ranger captain love interest is the cool, calm, capable, disciplined male person I longed to be for many years.

Yes, people, I always wanted to be a boy when I was young. Boys were fast and strong and tough and cool. I was awkward, clumsy, always sick and pretty much useless for anything but schoolwork. How I idolized the neighborhood boys. I wasn't in love with them. I just wanted to BE them.

My current heroine, Ginger, is in many ways my alter ego, though I didn't realize it at first. Smart but loveless, eager to prove herself but wary of failure, and wounded from the past but optimistic enough to believe in a rainbow waiting just around the corner. I could write her forever and feel like I have been, in numerous scenarios. Finally, I think I found her home and she's just popping off the page.

Even the villains are a little piece of me: the piece that secretly wants to control and manipulate so I won't have to be afraid any more. They also incorporate a lot of the people who have hurt me through my life or whom I've watched hurt others: The bitter, selfish neglecters, the master manipulators, and the ones so afraid of rejection that they hurt everyone near them.

None of my villains are cold, distant super-villains like Loki or Saruman or Gorden Gecko. They are intensely, gut-wrenchingly personal.

What about you? How do you see pieces of yourself in your characters?

Five Things NOT to Do in Suspense or Speculative Fiction

I've been reading more lately and I've noticed some things that turn me off of suspense/speculative stories. Both lesser-known and bestselling authors have used these tricks, so it's not just a newbie thing at all.

1. Don't hide things from the reader just to make up for a slow-moving plot.

While it's true we don't want to tell our readers everything that's coming before it happens, at the same time if there is something they need to know that DID happen, tell them. When I was in college, my writing professor called this "false suspense."

Example: A spy novel where a package is delivered, its contents examined, and great hullabaloo ensues, but we are not told for five chapters what those contents actually are. I, for one, stop caring.

2. Don't jump around in time and POV too much just to make up for a slow plot.

I suppose I could call this "false excitement" but it really is "disorientation." Back and forth we hop, from the action from the hero's point of view, to a few months earlier from the spy's point of view in which he is contemplating a run-in with a Columbian drug lord that has nothing whatsoever to do with the current situation (trust me, it really has nothing to do with it), back to the girlfriend's point-of-view in the action, then to her reliving a conversation with the hero at lunch last week.

I could see maybe in a very tense, critical moment when you need to diffuse things or the characters really are caught up in their own heads in order to avoid dealing with the crisis in front of them, but not as a regular pattern through the whole book.

3. Don't make your hero so troubled that I don't like him or her.

This seems to be a trending fault in fantasy, and probably science fiction as well though I don't read much of it. In the effort to be gritty, authors create protagonists that come off as selfish and unlikeable. I don't care how bad his childhood was or how much danger he's in, if he acts like a jerk he's a jerk. Which leads me to the next one.

4. Don't give your protagonist such a gruesome backstory that it distracts from the current situation.

Again, the effort to be "gritty" has produced some really, really horrible setups. Am I the only person left in the world who is not immune to the horrors of rape, incest, torture, brandings, beatings, severe emotional abuse, abandonment, etc. etc. etc.? If you bring these things into the story you have to deal with them, and that means your reader must as well.

Your characters also have to deal with them, and if the characters are dealing with them, they're not able to function well. I get that not functioning well is the purpose; that you're challenging them. Okay. But when everyone is running around all traumatized and bloody before the story even really gets going, then it's not a place I want to be for 300 pages.

5. Don't make the pace so relentless that I stop caring what happens

There is a difference between an exciting read and an exhausting one. Something that good writers do well is pacing. Break things up with a little humor or romance between the confrontations. It doesn't have to be a lot. I'm not suggesting that you turn your hero into a sissy or your heroine into some jokey schoolgirl, but humor and affection are how real people cope with life. If your book doesn't have that, then your characters stop feeling like real people to me.

Do you agree or disagree? What are your pet peeves in genre fiction?

I have jumped into NaNoWriMo and found that I can swim. I can't remember when my own work was this much fun. I know it's the honeymoon week and all that, but don't spoil it for me by telling me how much I'll hate my book next week.

One thing I've caught myself doing is editing. That really wreaks havoc on one's word count. I'm accustomed to skimming over the previous day's work before I pick up where I left off, doing some cursory editing along the way. My solution to this for Nano is to color the parts I don't want to keep in gray font.

I also insert a little "+" symbol at the end of each day's writing to help me remember where I stopped so I can select the appropriate section of the manuscript to get a correct word count. 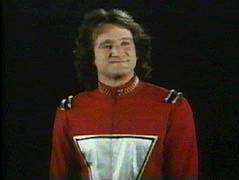 Or, "Nanoo-nanoo," depending on what planet you are from. That's Robin Williams as Mork from "Mork and Mindy" for those of you who are too young to remember the 80's. Ahem.

I have signed up for NaNoWriMo this year, against my better judgement, but am loving it so far. I got up at 4:30 - yes, four-stinking-thirty - in the morning to write today. I got 1200 words down in about an hour.

Really? 1200 words? Like when has that ever happened before?

It's like this dam just opened inside me. I have this great story that I've been trying to write for a while now and just not been happy with any of my starts. So this time I started over again and it's just flowing like a charm. I think it has a lot to do with not trying to be perfect the first time out.

So, back to writing. I have another 800 words to go tonight! Good luck to everyone who's doing Nano too.