Things I learned about Writing from Disney World


My family and I recently returned from our first trip together to Disney World. It was awesome. Mid-January is a great time to go. The parks are not crowded at all. (Shhh! Don't tell anyone.)

It was torture, however, in that I did not have good wi-fi or 3G coverage, and so was basically cut off from the Internet. I also couldn't write, as travelling with kids and crowding into one hotel room doesn't leave much time for writing, let alone privacy. But I did have plenty of time to muse as we walked through the various parks and waited in line for rides.

What really impressed me was the power of the imaginary world created in each area of each park. I think it was most noticeable to me in the Animal Kingdom as we moved between Asia and Africa, and in the Magic Kingdom between Tomorrowland and Adventure Land.  I recalled from years ago that the rides had lots to keep you interested while you were waiting in line, but it seemed that things had gotten even more engaging since I was there last in 1995.

Perhaps this is because my work-addled brain was desperate for amusement, or perhaps it's because I look at everything now through the eyes of a writer.

What struck me over and over were three things:

That is what drives each tale, each area, each ride. Tigger is bouncy, Pooh is sweet, Jack Sparrow raunchy and brave, C-3PO pompus and silly.

There are AT-AT's searching for rebel troops among the redwood forests of Endor. Immediately you have plot and setting. Just add a few troops and a young ewok, and there's your story. 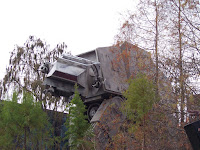 Or in our case, a couple of young Jedi.

The last night we had dinner in the Norweigan Castle. I was in absolute Heaven!

We did not know that this was the"Princess Dinner." Belle, Cinderella, Aurora, Snow White and Ariel (minus fins) all found their way to the table. The boys were absolutely mortified and refused to have a picture taken with any of them.

I have to give Cinderella credit. She really tried to engage our two young princes.

"Will you help defend my castle?" she asked.

My son stared down at his plate. "I'm sorry. I have business with the Vikings. I can't."

THAT is the power of story, folks!
Posted by Nighfala at 8:56 PM