Roni at *Fiction Groupie*  is hosting the "Let's Talk" blogfest today.  She suggested we post a short excerpt of sparkly dialogue.  My WIP doesn't have a lot of sparkly chat, but there is one scene involving a mischievous younger brother who can't resist teasing his sister about her upcoming nuptials.

When they had eaten, Gorrith announced, “I have composed a song.  Would you like to hear it?”

“Yes!” said everyone else.

Gorrith stood up from where he had been lounging on the grass, clasped his hands behind his back and began to sing in a clear, pleasant voice.

He made a deep bow and everyone laughed, even Pelwyn. “When I am Queen, you won’t dare tease me.”

“When you are Queen, you will need teasing more than ever.”

“You would make an excellent minstrel,” said Marenya.  “You would do well to get paid for your nonsense.”

“I would take payment now, my lady,” said Gorrith.

“All I have is this piece of cake.”

“That will do nicely.” 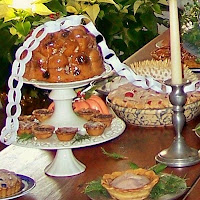 She handed it to him and he sat down again and proceeded to pick out the currents, leaving the cake.

“No, I am merely taking the currency from it as my payment.”  He grinned, and all she could do was shake her head at him.
Posted by Nighfala at 7:00 AM