You Gotta Have Soul

Agent Rachelle Gardner wrote a post on her blog comparing the competition for publishing contracts to American Idol. "The talent here is ridiculous," she quotes one contestant as saying (also the title of the post). Then she goes on to make the analogy about how you don't just need to be talented, you need to be better than everyone else to break into the biz. All that stuff that just makes my confidence fall to zero every time I hear it, especially from an agent.

Then someone who chose to post anonymously (but gave me permission to use his comment) said this:

I am a 50 year old man whose first book is about to arrive in the shops. On the face of it my path to publication has been embarrassingly easy. Was taken on by the agent of my choice overnight on the strength of one chapter, and this was followed by an auction between every publisher my work was sent to (5 of them.)

BUT (and it's a big but) as a young man I dreamed of being a writer. I wrote daily, relentlessly ...and got absolutely nowhere. Finally I put down my pen, and got on with my life. I lived a little, and then I lived a lot. Finally I decided the time was right. I walked out on my job and started writing again.

Which brings me back to the singing competition. Almost anyone can learn to sing - you can go to vocal coaches, you can learn the techniques. But out of that pool of talent, there will be one or two who stand out, because they've got soul. Their voice somehow projects the weight of a human life in a way that goes beyond technique. It's that and only that which will make you stand out from the competition. 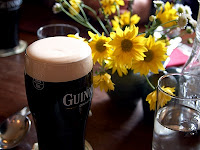 I don't know who this person is, but I would like very much to buy him a drink. Because I felt like he was telling me my own story. At least, the "putting down my pen and getting on with life until I felt it was time to start up again" part. The "embarrassingly easy path to publication" remains to be seen.

I stopped writing in my twenties because I realized that I didn't have anything to say. It wasn't until I'd really put myself out there in the world and suffered a while (I know this is a cliche' but it's the truth, dammit!) that I felt I had something to write about.

Now I've got so much going on in my story that it overwhelms me, and I'm afraid it may overwhelm the readers. Good God, my characters suffer! And it seemed like so much sweetness and light at first. But isn't that the way life always is?

This story is emotionally powerful. And that is why I feel it needs to be told. I may or may not get published. It may or may not be easy. But thank you, Anonymous, from the bottom of my heart for reminding me why it's worth writing.

Image courtesy of PD Photo.org
Posted by Nighfala at 9:32 PM