A Fairy in My Fireplace 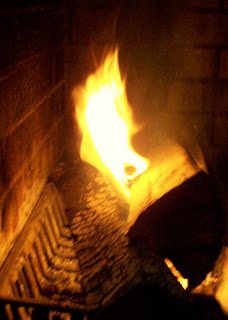 I caught a glimpse of a fire fairy dancing in my fireplace. Or is it something else? What do you think?

If you're a writer, what would your characters think this is? A fairy, a demon, an alien, a magical messenger... Do tell me.

As far as my own characters go...

Marenya would think it a fire sprite.
Faldur would assume it was no more than a curious flame shaped by the wind.
Ginger would think she was hallucinating due to the drugs Roger is clearly slipping her to make her believe in 'magic.'
Batya would think the spirit of the baby dragon had returned to keep her company.
Chris would figure whatever it was, as long as it didn't bother him he wouldn't bother it.
Raynor would try to catch it and find out.