Another blogfest! Rachel Bateman is hosting this one. I decided to put up a scene from my abandoned romance novel.  This is first draft stuff, so just, er, keep that in mind as you read. 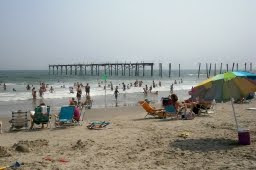 Instead of walking to the beach near the boardwalk, Ginger loaded her things into the car and drove to the far end of the island, away from the tourists.  She set up a chair and umbrella, covered herself well with sunblock, and strolled down along the water, soaking in the sunshine and picking up small stones and shells.  She didn’t think much about anything.  She was in one of those rare moments of just “being.”
As she made the return trip to her belongings, she saw an Italian family that had set up camp on the beach.  They had erected a large sun tent, a volleyball net with boundary lines drawn in the sand, a sprawling collection of beach chairs and coolers, and the beginnings of an enormous sandcastle.  The adult men were in the process of planning the construction and directing the older children in digging the moat. The women were keeping the little children from being washed out to sea as they played in the waves, and the grandparents were comfortably settled in their chairs under the tent, watching all the proceedings with detached interest.
One of the men looked like Ray, but she couldn’t be sure.  He was shaping a tower for the castle with a small, plastic trash can.  She watched him for a minute, admiring his suntanned back, wondering if she should come closer and see if it was really him or not.  They had spent so much time together the night before, she was inclined to be alone today, but she didn’t want to appear to be rude if it was him.  As she watched, one of the little children started crying, having been knocked down by a wave.  He was scooped up by a skinny young mother in a bikini and carried to the tent.  To her surprise, the child didn’t seem to want to be with the woman, but reached out for the man who looked like Ray.  As he turned to receive the child, she realized that it was him after all.
“Dad-deeeee!” was the wail that wafted over the other voices.
Having deposited her charge, the woman in the bikini went to talk to another man, who put his arm possessively around her waist and shared his soda with her.  The she started scolding one of the older children for something.  Ginger realized that the woman was not the child’s mother or Ray’s wife, but obviously some close friend or relative.
She watched, fascinated, as Ray comforted the toddler.  The child was adorable.  Compact, sun-browned body with just a hint of chubbiness, looking very boyish in his butch haircut and red swim trunks.  He had a sweet, round face and big, dark eyes.  Ray carried him to the tent, dried him off with a towel, and provided him with a sippy cup of juice.  He produced some kind of snack in a little plastic bag, and gave it to the child, then got himself a soda from a cooler.  The child then demanded the soda and was refused.  He crumpled his face to cry but thought better of it and contented himself with his juice.
Ray was as competent as any mother.  Ginger shook her head in amazement.  I’m not the only one with a secret, she thought.
Posted by Nighfala at 6:06 AM