Okay, everyone, I have been bitten by the contest bug. I am finally ready to have my very own 100 Followers Contest.

First of all, I want to say "Thanks!" to everyone who is already following me. I swear, I never imagined I'd have sixty-three whole human beings interested in what I have to say. I'm truly overwhelmed.

So, time for some prizes. This is the totally easy part.  You know how it works: Become a follower (if you aren't one already) and post in the comment section to be added to the running for some awesome prizes.  You get extra entries for tweeting, facebooking or posting about the contest on your website. Let me know how many of these things you are doing in the comments.  I want everyone to get credit for sharing the bloggy love.

The prizes are (drum roll please): 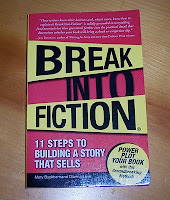 First Prize:  A copy of "Break Into Fiction: 11 Steps to Building a Story that Sells" which includes write-in sections to power-plot your own novel.  A great tool for discovering your story and characters and putting them into agent-ready format. 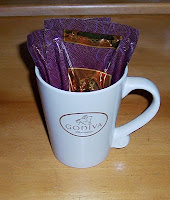 Second Prize: For the ladies, a lovely Godiva coffee mug with two packets of Godiva Milk Chocolate cocoa mix. This type of tapering mug is my favorite to hold and drink from, perhaps because it tends to tilt the beverage to one's mouth with less effort than a straight-edge mug. 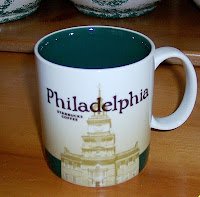 Alternative Second Prize:  The more masculine Philadelphia Starbucks Coffee mug. This is one big mug... for those late nights and early mornings that can only be survived by copious caffeine consumption.  Don't worry, I'll throw in some of that hot cocoa mix, too.

Third Prize: A magnetic memo pad.  Because we writers are forgetful people.  This would be a handy place to jot down all those things you need to do after you are done writing.  Like, "take a shower" and "call Mom" and "order dinner."

Or, it might be a place to jot down those fantastic ideas you have for your story while attending to your non-writing life.  Or even (Dare I say it?) "Things to Blog About."

(An appropriate masculine substitute will be provided should the third place winner be male. Be assured that, living in a predominantly male household, I am sensitive to the whole "floral antipathy factor.")

You have until Friday, August 27th to sign up.  Winners will be announced on Monday, August 30th.
So that's it, people!  And don't forget:  Write First, Blog Later.

P.S. In order to qualify, you must become a follower on the Google Friend Connect thingy on the sidebar.  Thanks!
Posted by Nighfala at 2:04 PM