Today is the Guess That Character Blogfest hosted by Jen at Unedited  Today I'm posting a passage featuring a character, and you are to guess what he looks like.  Tomorrow I'll post his actual physical description.  Ready? 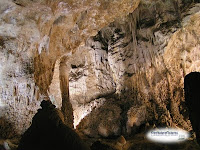 Raynor shrugged and turned towards the back of the cave. Opening his hand, he made a motion as if throwing something up into the air. An apple-sized orb of yellow light leapt from his palm and floated above and a little ahead of him. Then, taking the reins of the horse, he motioned for her to follow him. The noise of the falls made speech useless.

She stayed where she was.

His countenance clouded, and in a rush of emotion that she didn’t understand, she felt a great struggle emanate from him. Perhaps it was because of the spell that had joined them until a little while ago, or perhaps his emotions were too intense for him to control, but she knew that he was both angry and desperate, and consumed by a darkness as vast and hopeless as the cold earth beneath them. She felt the hard edge of his anger, too, and the force of his will reaching out to make her come.
Posted by Nighfala at 10:32 AM