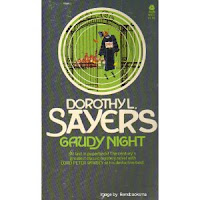 Good grief! Why do I always tear up when reading a Harriet Vane / Lord Peter Wimsey novel?  You wouldn't think that a book with a cover like this one would be particularly sentimental, would you?  Especially since it is far from sentimentally written. But this series, written in the 1930's, gets me every time.

The scene which moistened my eyes this morning takes place at Peter's club in London.  He has invited Harriet to dine with him there.  He frequently invites Harriet to dine with him, and she accepts despite the fact that she really would rather be rid of him.  He saved her from a false murder charge for killing her ex-lover and she feels indebted.  However, his frequent marriage proposals are becoming too tiresome, and she is determined to break it off, for both of their sakes.

They are in the midst of a discussion about the different roles in life of people who are extremely intelligent from those who feel things deeply, as well as the complications that come from a person being both, when Peter says,

"Has your napkin gone again?" (It's been slipping off the lap of her silk dress throughout their conversation.)

"Oh!" He looked around, but the waiter had vanished.

"Well," he went on, without moving, "it's in the heart's office to wait upon the brain, but in the view of--"

"In view of the fact that I have two cracked ribs, I'd better not try; because if once I got down I should probably never get up again."

"Good gracious!" said Harriet.  "I thought you seemed a little stiff in your manner.  Why on earth didn't you say so before, instead of sitting there like a martyr and inveigling me into misjudging you?"

"I don't seem to be able to do anything right," he said plaintively.

"How did you manage to do it?"

"Fell off a wall in the most inartistic manner.  I was in a bit of a hurry; there was a very plain-looking bloke on the other side with a gun. (Peter has just solved another murder case.)  It wasn't so much the wall, as the wheelbarrow at the bottom.  And it really isn't so much the ribs as the sticking-plaster.  It's strapped tight as hell and itches infernally."

"How beastly for you. I'm so sorry. What became of the bloke with the gun?"

"If the luck had been the other way, I suppose they wouldn't have troubled you any longer."

"Probably not. And then I shouldn't have troubled you any longer.  If my mind had been where my heart was, I would have welcomed that settlement. But my mind being momentarily on the job, I ran away with the greatest rapidity so as to finish the case."

"Are you? That shows how hard it is for even the most powerful brain to be completely heartless.  Let me see. It is not my day for asking you to marry me, and a few yards of sticking-plaster are hardly enough to make it a special occasion. But we'll have coffee in the lounge, if you don't mind, because this chair is getting as hard as the wheelbarrow and is catching me in several of the same places."

(She helps him to the lounge, and the waiter brings her dropped purse along with some letters which had fallen out of it.  She had picked up the mail on her way out and not looked at it yet.  One of the items is a postcard with a nasty message on it.  Peter sees her face when she reads it, and insists on being shown it.)

She handed it to him without looking up. "Ask your boyfriend with the title if he likes arsenic in his soup.  What did you give him to get you off?"

"God, what muck!" said he, bitterly.  "So that's what I'm letting you in for.  I might have known it.  I could hardly hope that it wasn't so. But you said nothing, so I allowed myself to be selfish."

"It doesn't matter. It's just part of the consequences. You can't do anything about it."

"I might have had the consideration not to expose you to it. Heaven knows you've tried hard enough to get rid of me.  In fact, I think you've used every possible lever to dislodge me, except that one."

She realized that this, to him, must sound completely lunatic.

"I mean that, Peter, I know I've said about every damnable thing to you that I could think of. But I have my limits."  A sudden wave of anger surged up in her.  "My God, do you really think that of me? Do you suppose there's no meanness I wouldn't stoop to?"

"You'd have been perfectly justified in telling me that I was making things more difficult by hanging around."

"Should I? Did you expect me to tell you that you were compromising my reputation, when I had none to compromise?  To point out that you'd saved me from the gallows, thank you very much, but left me in the pillory?  To say, my name's mud but kindly treat it as lilies?  I'm not quite such a hypocrite as that."

"I see. The plain fact is I am doing nothing but make life a little bitterer for you.  It was generous of you not to say so."

(He proceeds to burn the postcard and declares his intention to "admit defeat and say good-bye." He also observes that since he was vanquished by Fate in the form of a postcard, he can walk away with his vanity intact.)

"Peter, I'm afraid I'm not very consistent. I came here tonight with the firm intention of telling you to chuck it.  But I'd rather fight my own battles. I-- I--" She looked up and went on rather quaveringly -- "I'm damned if I'll have you wiped out by plug-uglies or anonymous letter writers!"

He sat up sharply, so that his exclamation of pleasure turned half-way into an anguished grunt.   "Oh, curse this sticking plaster! . . . Harriet, you have got guts, haven't you?  Give me your hand and we'll fight on until we drop. Here! None of that.  You can't cry in this club. It's never been done, and if you disgrace me like this, I shall get into a row with the Committee. They'll probably close the Ladies' Rooms altogether.

"And don't put sugar in my coffee!"


Later in the evening, having lent a strong arm to extricate him, swearing loudly, from the difficult depths of the couch, and dispatched him to such rest as he might reasonably look for between the pains of love and sticking-plaster, she had leisure to reflect that if fate had vanquished either of them, it was not Lord Peter Wimsey.

This is where I wish several things. I wish that Lord Peter was a real person and that I had been born in 1903 in order to be the appropriate age to know him.  I wish that I had gone to Oxford like Dorothy Sayers and could create such brilliant, intellectual dialogue.  I wish that I had the boldness to write so truly about the human condition, and the cleverness to disguise it in wit and self-deprecation.  And, I wish that I were allowed to use big words in popular fiction.  The truth is, I don't really know what "inveigling" means but I can infer it from the context, and I actually enjoy the challenge of having to look something up.  But I fear an editor would make me take it out if I had used it.

I also wish that conventional wisdom wasn't so against the use of adjectives, several of which are used in this passage. Quite effectively so, in my opinion.

Time to turn on your Internal Editor:
* What do you see in this scene that is particularly well-done?
* What things betray it as being written eighty years ago?
* Do you think it would be published today? (The book actually opens with a long, reflective scene in which Harriet is debating whether or not to attend her college reunion, aka "Gaudy Night.")
Posted by Nighfala at 9:52 AM