One of the surprising consequences of writing fantasy fiction is that I have discovered a whole side of my creative self that I never knew existed:  The Dark Side Of Christine.  I'm writing action scenes, death scenes, scenes of blood and terror. It's not like I'm going to start competing with Stephen King any time soon, but still... it's not what I expected.

The following is one of the key action scenes in the first part of the novel.  My goal as an author: eliminate characters so that Faldur and Marenya have to spend some time alone in the forest at night.

The Setup:
While traveling to the capital for Pelwyn's wedding to the Prince of Belhanor, our heroes have had to change their course and take to the forest after being attacked on the road.  Faldur, a Ranger captain, is trying to get the little group to safety before nightfall.  Nightstalkers are renegade lions left over from a civil war in which they were trained to kill soldiers.  Now they have a habit of attacking unwary travelers after dark.  Dories are a type of animal which the Hanorja ride; they are a kind of combination of pony and goat.  Marenya is Pelwyn's cousin, and interested in Faldur.  Romer is another Ranger. Gorrith is Pelwyn's younger brother.

(PS I'm still working on this, so consider your internal editor duly warned.) 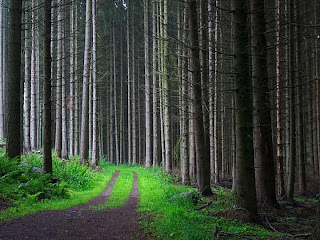 They rode on while the sun continued to sink, sending only an occasional orange shaft into the deepening dusk. It was farther than he remembered to the place that he wanted to reach. Presently the leafy trees ended, and they found themselves on the edge of a pine wood, dark and thick, the trunks stretching row upon row into the gloom.

Pelwyn said, “Are we going in there?”

“Yes. There is a Ranger camp in a clearing. It’s not far. There is a stream, grazing for the dories, and firewood.”

As they entered the pines, an eerie quiet engulfed them. The thick carpet of needles on the ground absorbed every sound. No shaft of light reached beneath the dense branches, though if the travelers looked straight up they could still see patches of blue sky. The eeriness grew until they were all uneasy. The dories turned their ears in all directions and trotted quickly along the path.

A jay screamed and flew low in front of Marenya’s dory. The dappled mare shied and then stood stock still, trembling. It took a minute for Marenya to soothe her. Faldur thought he could see dark shapes moving stealthily among the trees. The clearing was only about five hundred yards ahead of them. They needed to get to open ground.

“Hurry!” he murmured to Marenya.

She glanced at him as she remounted. “What is it?”

He urged Strider forward as fast as he dared. Then a breeze wafted from the clearing towards them; the dories smelled the grass and surged ahead. Faldur tried to slow them down, not wanting to excite whatever was following them. He feared it was nightstalkers. He glanced back and read in Romer’s face that he had seen them too.

Faldur saw the glimmer of stars overhead as he reached the clearing and drew aside, preparing to let Marenya and Pelwyn ride past him into the open. Then several things happened at once. Romer yelled, “Lions!” Pelwyn screamed and Snowfall bolted past him into the clearing. There was a terrible snarl behind him and a strangled cry. He turned Strider and drew his sword just as an enormous dark shape rushed at him. Strider lowered his great curved horns and rammed his head into the lion’s chest. It swiped at both dory and rider, but being momentarily checked by Strider’s blow, it staggered and missed its mark. Faldur ducked and brought his blade across its throat. It reeled back, making horrible gasping sounds, and fell to the ground.

A second nightstalker attacked him from among the trees. Faldur was knocked from Strider’s back. As he rolled and raised his sword, the lion sank its teeth into his shoulder shaking him back and forth. Pain exploded in his shoulder; he screamed and dropped the sword. Strider rammed the side of the nightstalker’s head and it let go of him to attack the dory, swiping his flank with a great paw. Strider reared and rained blows on the lion’s head with his small, sharp hooves.

Faldur grabbed his knife from his belt with his undamaged arm and struggled to raise himself to his feet.
The nightstalker turned his attention back to the Ranger, letting the dory gallop free into the clearing. It yowled, laid its ears back and surged forward, then suddenly stopped, shrieked, and twisted in pain. As it slashed at something behind it, Faldur rushed forward and drove the knife into its chest. It staggered, its head wagging back and forth. Faldur pulled the knife out and stabbed it in the heart. This time it fell to the ground and didn’t move.

As it fell he saw the gleam of his own sword stuck in its back. Marenya stood wide-eyed with disbelief, one hand clapped against her face, and the other stretched open in front of her where the sword had been wrenched from it.
“Are you alright?” Faldur’s own voice was harsh with pain.

She nodded. He rushed past her to look for the others, holding his right arm against his body and clenching his teeth against the pain in his shoulder. Gorrith lay in the path, his chest covered with blood. He was still holding his dagger, which was stained with blood. Faldur swore loudly and fell to his knees beside him. Gorrith was still breathing but had retreated inside himself, instinctively slowing his heart so as not to bleed to death. There was a good chance he would survive, if they could keep him warm and tend him until he was mended enough to wake. Faldur gently took the dagger from his fingers and laid it aside.

Romer was lying nearby, arms outflung, neck at an awkward angle. Faldur went to him, knowing he was dead before he touched him. Being the rear guard, he had probably been attacked first. They had ridden together nearly every day for the last nine years, but this was not the time to weep.
Posted by Nighfala at 5:00 AM